We are back in Trinidad. We have been here since the 14th and have been busy getting Hi Flite ready for the next seasons adventure.

When we left last spring we had contracted with several workers for projects while we were gone.  The big one was to have the teak rail that goes around the boat on the deck replaced.  That is completed and looks amazing.  The old cap-rail had been sanded so many times over the years that the bungs covering the screws were coming out and we were getting leaks in a variety of locations.  In order to do that project we had to have her covered.  We are still under the cover but it is helping with Cori's project to repaint the non-skid decking.  Another project that I was not aware of, was painting the areas of the deck that are not non-skid.  Several years ago we had the cockpit painted a new color and were planning to follow up with painting the rest of the boat.  It kept getting pushed back in the project list and hadn't happened.  This year Cori was talking with one of the workers and he pointed out that it would be easier and cheaper to have the painting done while the cap-rail was off.  She told him to go ahead and do it as a surprise for me.  We now look complete, no longer two-toned.  We are also having the bottom paint removed down to the bare gel-coat and will be sealing the bottom and giving her a couple of coats of anti-fouling paint.  The last layers were not doing their job of preventing growth and needed to be repainted.  The contractor, said there were about twenty five layers that he stripped off. 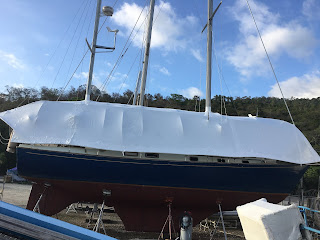 Once the cover is off the canvas maker will be able to finish the cockpit cover and enclosure we ordered.  We have always had a cover (bimini) for the cockpit but not side curtains.  We are now to the point we no longer want to keep getting wet when a wave splashes into the cockpit.  This will also make the cockpit more livable in inclement weather.  We should still be able to be in the cockpit when it is raining instead of heading below every time it rains, which can be often.

Once these and several other smaller projects are completed we will be back in the water and ready to start "wandering aimlessly about the Caribbean".  Our first stop will be in Granada to pick up some items that we have stored there and to drop off some goods we brought for some friends.  After that we are planning to work our way North visiting some of the spots we have enjoyed in the past and will be checking out several islands and anchorages we have not visited yet.  At that point we will work our way back down to Trinidad to put the boat up for another summer and we will return back to the States.
Posted by HiFlite at 6:58 PM

HiFlite
We are Dale and Cori, owners of Hi Flite, a Pearson 424 sailboat. We have been living aboard since 2004 and have now cast off the lines to begin full time cruising.